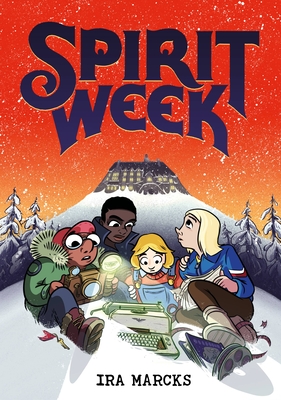 Aspiring engineer Suzy Hess is invited to the famous Underlook Hotel, domain of the reclusive horror writer Jack Axworth, in the mountains above her hometown of Estes Park, Colorado. Suzy thinks she’s there to tutor Jack’s son, Danny, but instead she finds herself investigating a local curse that threatens the landmark hotel.

With the help of Elijah Jones, an amateur filmmaker who thought he’d been asked to make a film about the so-called King of Horror; Rena Hallorann, the hotel’s caretaker; and Danny, who knows more than he’s letting on, Suzy sets out to solve the mystery at the heart of the Underlook, one that holds the town of Estes Park in its grasp. With only a week to save the hotel—and the town—the friends find themselves racing against time to uncover the shadows of the past.
Ira Marcks is a cartoonist living in Upstate New York with his wife, their cat and dog, and lots of books he's been meaning to read. He is the author of Shark Summer and Spirit Week. His love for ancient magic and possible futures has led him to create a warehouse of esoteric objects for the Hugo Award-winning magazine Weird Tales and to tell stories about villainous technology for the European Research Council.

"Marcks...has accomplished an unusual feat with this cinematic homage: He has produced a meta-graphic novel that manages to deconstruct a genre, pay tribute to it and keep the reader happily inside it all at the same time. More popcorn please!"—The New York Times

"Shark Summer is bursting with vibrant, expressive art that transports the reader to a summer on Martha's Vineyard, with a mystery that weaves through local gossip and school drama. The characters are distinct and relatable—kids with unique interests and big dreams, trying to figure out how to be good friends to each other. It's a lovely read!"
—Molly Knox Ostertag, author-illustrator of the Witch Boy series