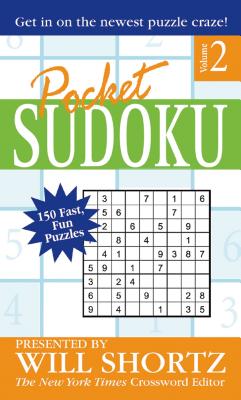 GET HOOKED ON THE LATEST PUZZLE CRAZE!

It's hot, fun, mind-boggling, and once you start, you won't want to stop. It's sudoku -- the new puzzle rage that's got the nation in a frenzy. New York Times crossword editor Will Shortz presents yet another stimulating and fun collection of 150 sudoku puzzles, ranging in difficulty from easy to more challenging. There are just a few simple rules: Fill in the empty boxes in the grid of 81 boxes, divided into nine three-by-three squares, so that every row, column, and square contains the numbers 1 through 9, without repeating. You don't need any mathematical knowledge. Whether you're a crossword enthusiast or a lover of puzzles, you'll want to try this latest sensation. Don't waste any more time. Pick up a pencil and test your wits with sudoku!

“The biggest craze to hit The Times since the first crossword puzzle was published in 1935. Sudoku is dangerous stuff. Forget work and family -- think papers hurled across the room and industrial-sized blobs of correction fluid. I love it!” —The Times of London

“Sudoku are to the first decade of the twenty-first century what Rubik's Cube was to the 1970s.” —The Daily Telegraph