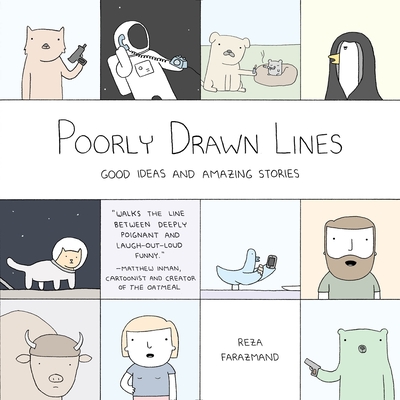 
On Our Shelves Now
Don’t Miss Poorly Drawn Lines on Cake, airing on FX and streaming on FX on Hulu!

This New York Times bestselling collection of absurd comics is the perfect funny gift for everyone in your life.

Life is weird. Embrace it. A bear flies through space. A hamster suffers a breakdown. A child marvels at the wonder of nature as worms emerge from the ground to look for vodka (as they always have). Elsewhere, a garden snake is arrested by animal control and jailed for home invasion. These are common occurrences in the world of Reza Farazmand’s wildly popular webcomic, Poorly Drawn Lines. Traveling from deep space to alternate realities to the bottom of the ocean, this collection includes fan favorites alongside never-before-seen comics and original essays. For the first time, Farazmand shares his inimitable take on love, nature, social acceptance, and robots.

Reza Farazmand is a New York Times-bestselling author, comedy writer, and creator of the popular internet comic series Poorly Drawn Lines. He has published four books, including the graphic novel City Monster and the comic and essay collection Poorly Drawn Lines: Good Ideas and Amazing Stories, along with two followup collections: Comics for a Strange World and Poorlier Drawn Lines. His work has been featured in McSweeney’s Internet Tendency, Adventure Time comics, Buzzfeed, NPR, and on Comedy Central. He lives and draws in Los Angeles.


“Poorly Drawn Lines consistently walks the line between deeply poignant and laugh-out-loud funny.”
—Matthew Inman, creator of The Oatmeal and New York Times bestselling author of 5 Very Good Reasons to Punch a Dolphin in the Mouth

“Poorly Drawn Lines is the funniest comic I've read since The Far Side.”
—Wil Wheaton, actor (Star Trek: The Next Generation; The Big Bang Theory)

“The Far Side meets Mad magazine, except with more swearing.”
—Mother Jones

“Farazmand's art style promises Sarah Boynton-greeting-card whimsy, but what he delivers is darker, weirder, funnier and completely his own.”
— Glen Weldon, author of Superman: The Unauthorized Biography