Any Other Name: A Longmire Mystery (Paperback) 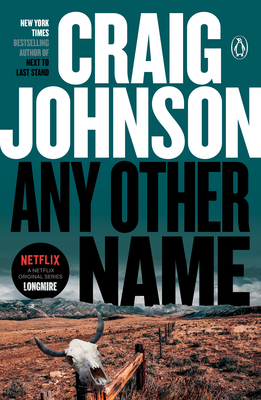 Any Other Name: A Longmire Mystery (Paperback)

This is book number 10 in the A Longmire Mystery series.

There is something about a book that is set in the Winter time that releases our natural A.C. to cool us down in the Summer time. The majority of the novel  takes place in a Wyoming blizzard that appears to put our Michigan winters to shame.
If you're not familiar with Craig Johnson's character, Walt Longmire, this could be the time to put him into your collection. Walt's charge in this story is to try and figure out why Phyllis Holman's husband committed suicide. From the beginning, Phyllis was warned, "He's like a gun; once you point him and pull the trigger, it's too late to change your mind." Once Walt's on the trail he doesn't stop until the truth is uncovered. Walt's daughter in Philadelphia has a bun in the oven with the timer in the red. She has informed Walt that if he should ever want to see his granddaughter, he must be there to welcome her into the world. So, Walt must find out why Phyllis's husband killed himself, keep himself from joining Gerald in the beyond, and make sure that his dog, Dog, is taken care of by the time the baby arrives.
We have Walt's longtime best friend, Henry Standing Bear, also known as "the Cheyenne Nation," making his regular appearance while probably extending Walt's life. We have a strip club owner who's brother is also the neighboring county's Sheriff. And we have Lucian, Walt's former boss, past sheriff, long-time confidant, and slightly senile sidekick to help Walt in his most desperate of times. There might even be a blast from the past showing up to remind Walt that there are finer things in life.
Read this book if you like cowboys, mysteries, Native American related stories, or adventures. I mean, it sounds easy to chase a pick up truck on foot through a heard of buffalo in the middle of a snowstorm, but I'm not so sure that we could pull it off without Craig Johnson's story telling. We could try to out run a train to save a life, but would we look as good doing it in a giant cowboy hat? Luckily, we won't have to try those things, because Walt is doing for us and teaching us lessons along the way.

— Alex
“It’s the scenery—and the big guy standing in front of the scenery—that keeps us coming back to Craig Johnson’s lean and leathery mysteries.”
—The New York Times Book Review

In Any Other Name, Walt is sinking into high-plains winter discontent when his former boss, Lucian Conally, asks him to take on a mercy case in an adjacent county. Detective Gerald Holman is dead and Lucian wants to know what drove his old friend to take his own life. With the clock ticking on the birth of his first grandchild, Walt learns that the by-the-book detective might have suppressed evidence concerning three missing women. Digging deeper, Walt uncovers an incriminating secret so dark that it threatens to claim other lives even before the sheriff can serve justice—Wyoming style.
Craig Johnson is the New York Times bestselling author of the Longmire mysteries, the basis for the hit Netflix original series Longmire. He is the recipient of the Western Writers of America Spur Award for fiction, the Mountains and Plains Booksellers Award for fiction, the Nouvel Observateur Prix du Roman Noir, and the Prix SNCF du Polar. His novella Spirit of Steamboat was the first One Book Wyoming selection. He lives in Ucross, Wyoming, population twenty-five.

“Top-notch....Johnson's hero only gets better—both at solving cases and at hooking readers—with age.” —Publishers Weekly

"Once more, you can count on Longmire...for action both physical and cerebral, a bit of humor and romance, and a mighty good mystery." —Kirkus Reviews

“Wyoming sheriff Walt Longmire’s eleventh case takes him out of his jurisdiction….Those who have followed the series all along will find no reason to stop now.”—Booklist

“[Johnson] has hit a home run....Indeed, this may be [his] best Longmire mystery yet.”—Wyoming Tribune Eagle

“Any Other Name is yet another fast-paced novel filled with Johnson's brand of Wild West humor and quick wit.”—Deseret News

“Suspenseful and always entertaining....The 11th Walt Longmire mystery is one of the best yet.”—The Oklahoman Review