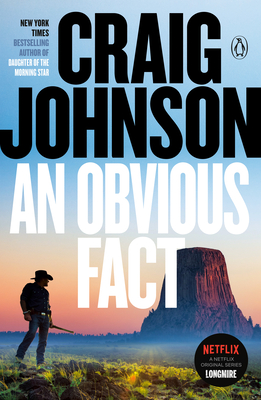 This is book number 12 in the A Longmire Mystery series.

In the twelfth Longmire novel, Walt, Henry, and Vic discover much more than they bargained for when they are called in to investigate a hit-and-run accident involving a young motorcyclist near Devils Tower—from the New York Times bestselling author of Land of Wolves

In the midst of the largest motorcycle rally in the world, a young biker is run off the road and ends up in critical condition. When Sheriff Walt Longmire and his good friend Henry Standing Bear are called to Hulett, Wyoming—the nearest town to America's first national monument, Devils Tower—to investigate, things start getting complicated. As competing biker gangs; the Bureau of Alcohol, Tobacco, and Firearms; a military-grade vehicle donated to the tiny local police force by a wealthy entrepreneur; and Lola, the real-life femme fatale and namesake for Henry's '59 Thunderbird (and, by extension, Walt's granddaughter) come into play, it rapidly becomes clear that there is more to get to the bottom of at this year's Sturgis Motorcycle Rally than a bike accident. After all, in the words of Arthur Conan Doyle, whose Adventures of Sherlock Holmes the Bear won't stop quoting, "There is nothing more deceptive than an obvious fact."
Craig Johnson is the New York Times bestselling author of the Longmire mysteries, the basis for the hit Netflix original series Longmire. He is the recipient of the Western Writers of America Spur Award for fiction, the Mountains and Plains Booksellers Award for fiction, the Nouvel Observateur Prix du Roman Noir, and the Prix SNCF du Polar. His novella Spirit of Steamboat was the first One Book Wyoming selection. He lives in Ucross, Wyoming, population twenty-five.

“Thrilling . . . Whether he’s squaring off against biker gangs or teasing out long-simmering feuds involving his closest friends, Walt Longmire is always the man for the job.” —Publishers Weekly

“A Walt Longmire novel is like going on a ride-along with an old friend, watching him ferret out the bad guys with wit and humanity (and more than a few bullets), while we swap stories and catch up on old times…it’s An Obvious Fact—it’s good to have Walt back on the scene.” —Mystery Scene

“The laconic modern-day cowboy Walt Longmire, is a guy you'd like to have a Rainier beer with.”—The Oklahoman

“[An Obvious Fact is] one of his best Longmire tales to date.”—Austin American-Statesman

"No urban crime series is more sophisticated or more amusing than the Longmire novels when it comes to the complicated psychology of criminals and their victims." —The Connecticut Post

Praise for Craig Johnson and the Walt Longmire Mystery Series