Winter in the Blood (Paperback) 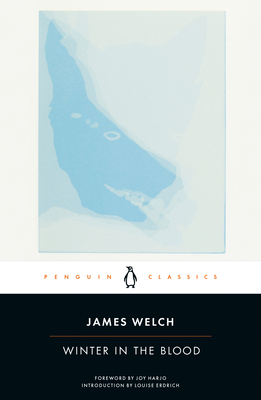 Winter in the Blood (Paperback)


Usually Ships in 1-5 Days
A contemporary classic from a major writer of the Native American renaissance — "Brilliant, brutal and, in my opinion, Welch's best work." —Tommy Orange, The Washington Post

During his life, James Welch came to be regarded as a master of American prose, and his first novel, Winter in the Blood, is one of his most enduring works. The narrator of this beautiful, often disquieting novel is a young Native American man living on the Fort Belknap Reservation in Montana. Sensitive and self-destructive, he searches for something that will bind him to the lands of his ancestors but is haunted by personal tragedy, the dissolution of his once proud heritage, and Montana's vast emptiness. Winter in the Blood is an evocative and unforgettable work of literature that will continue to move and inspire anyone who encounters it.

For more than seventy years, Penguin has been the leading publisher of classic literature in the English-speaking world. With more than 1,700 titles, Penguin Classics represents a global bookshelf of the best works throughout history and across genres and disciplines. Readers trust the series to provide authoritative texts enhanced by introductions and notes by distinguished scholars and contemporary authors, as well as up-to-date translations by award-winning translators.
James Welch was the author of the novels Winter in the Blood, Fools Crow, for which he received the Los Angeles Times Book Prize, an American Book Award, and the Pacific Northwest Booksellers Award, The Indian Lawyer, The Death of Jim Loney, and Killing Custer: The Battle of the Little Bighorn and the Fate of the Plains Indians. He attended schools on the Blackfeet and Fort Belknap reservations in Montana, graduated from the University of Montana, where he studied writing with the late Richard Hugo, and served on the Montana State Board of Pardons.

Bestselling author Louise Erdrich grew up in North Dakota and is of German and Turtle Mountain Chippewa descent. Her novels include Love Medicine and The Beet Queen.

"A nearly flawless novel about human life . . . Few books in any year speak so unanswerably, make their own local terms so thoroughly ours."
-Reynolds Price, The New York Times Book Review

"For some readers this will be the most significant piece of Indian writing they have yet encountered; for others it will simply be a brilliant novel."
-The New Republic