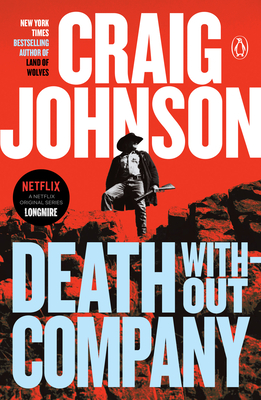 This is book number 2 in the A Longmire Mystery series.

Walt investigates a death by poison in this gripping novel from the New York Times bestselling author of Dry Bones, the second in the Longmire Mystery Series, the basis for the hit Netflix original series LONGMIRE

Fans of Ace Atkins, Nevada Barr and Robert B. Parker will love Craig Johnson, New York Times bestselling author of Hell Is Empty and As the Crow Flies, who garnered both praise and an enthusiastic readership with his acclaimed debut novel featuring Sheriff Walt Longmire, The Cold Dish, the first in the Longmire Mystery Series, the basis for LONGMIRE, now on Netflix. Now Johnson takes us back to the rugged landscape of Absaroka County, Wyoming, for Death Without Company. When Mari Baroja is found poisoned at the Durant Home for Assisted Living, Sheriff Longmire is drawn into an investigation that reaches fifty years into the mysterious woman’s dramatic Basque past. Aided by his friend Henry Standing Bear, Deputy Victoria Moretti, and newcomer Santiago Saizarbitoria, Sheriff Longmire must connect the specter of the past to the present to find the killer among them.

Craig Johnson is the New York Times bestselling author of the Longmire mysteries, the basis for the hit Netflix original series Longmire. He is the recipient of the Western Writers of America Spur Award for fiction, the Mountains and Plains Booksellers Award for fiction, the Nouvel Observateur Prix du Roman Noir, and the Prix SNCF du Polar. His novella Spirit of Steamboat was the first One Book Wyoming selection. He lives in Ucross, Wyoming, population twenty-five.

Johnson has continued a series that should become a ‘must’ read. (The Denver Post)

Johnson delivers great storytelling in an intelligent mystery. (The Oregonian)