The Way of the Bear: A Novel (A Leaphorn, Chee & Manuelito Novel #8) (Hardcover) 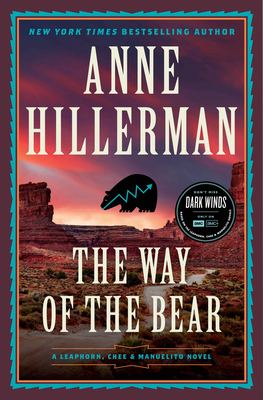 The Way of the Bear: A Novel (A Leaphorn, Chee & Manuelito Novel #8) (Hardcover)

This is book number 8 in the A Leaphorn, Chee & Manuelito Novel series.

An unexpected death on a lonely road outside of Utah’s Bears Ears National Park raises questions for Navajo Tribal Police officers Jim Chee and Bernadette Manuelito. Why would a seasoned outdoorsman and well-known paleontologist freeze to death within walking distance of his car? A second death brings more turmoil. Who is the unidentified man killed during a home invasion where nothing seems to have been taken? Why was he murdered?

The Bears Ears area, at the edge of the Navajo Nation, is celebrated for its abundance of early human habitation sites and the discovery of unique fossils which revolutionized the scientific view of how early animals dealt with their changing world. For Chee and Bernie, the area glows with geological interest and spiritual insight. But their visit to this achingly beautiful place is disrupted by a current of unprecedented violence that sweeps them both into danger.

An illicit business, a fossilized jaw bone, hints of witchcraft, and a mysterious disappearance during a blizzard and to the peril. It will take all of Manuelito’s and Chee’s experience, skill, and intuition to navigate the threats that arise beneath the twin buttes that give Bears Ears its name and to see justice served.

“Tony Hillerman fans will appreciate Anne keeping his fictional creations, Jim Chee and Joe Leaphorn, alive and thriving. The storytelling gene has been proudly passed on from father to daughter.” — Book Reporter on STARGAZER

“Hillerman’s writing becomes stronger with every new installment in the series, deepening the development of each character. . . . The picturesque Southwest, as well as the history of the Navajo, come through on each page.” — Library Journal (starred review) on THE TALE TELLER

“The Tale Teller is more than just a police procedural set in the Southwest; it’s a reading experience not to be missed. Anne Hillerman has reached a new level of storytelling in this one, and she deserves recognition as one of the finest mystery authors currently working in the genre.” — New York Journal of Books on THE TALE TELLER

“Hillerman seamlessly blends tribal lore and custom into a well-directed plot, continuing in the spirit of her late father, Tony, by keeping his characters (like Chee) in the mix, but still establishing Manuelito as the main player in what has become a fine legacy series.” — Booklist on SONG OF THE LION

“The latest from Hillerman continues worldbuilding in a tale that will reward long-term readers.” — Kirkus Reviews on SONG OF THE LION

“Fans of Leaphorn, Chee, and Manuelito, characters created by the author’s father, Tony Hillerman, will savor this multilayered story of suspense, with its background of contemporary environmental versus development issues.” — Library Journal on SONG OF THE LION