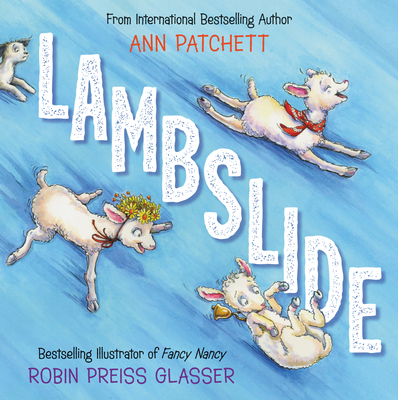 “Oh, what a joyful, playful story! Life on the farm can seem a little dull, but when the lambs hear ‘lambslide’ instead of ‘landslide’ by mistake, it becomes the talk of the farm. Getting the votes of the animals and the farmers leads to a cooperative effort to build the best lambslide ever! Great illustrations make this story special. Patchett and Glasser are a dynamic duo for sure.”
— Melissa DeMotte, The Well-Read Moose, Coeur d'Alene, ID

From the international bestselling author of Bel Canto and Commonwealth, Ann Patchett, and the bestselling illustrator of the Fancy Nancy series, Robin Preiss Glasser, comes a hilarious children’s story about a slide made just for lambs.

Nicolette Farmer is running for class president, and the rest of the Farmer family tells her she’ll win by a landslide. A pack of overconfident lambs mistakenly hear lambslide and can’t believe there’s a slide made just for them. But when they can’t find one on the farm, there’s only one thing left to do: take a vote!

They campaign. They bargain. They ask all the other animals if they, too, would like a lambslide.

Will the lambs ever get their special slide?

Find out in this epic collaboration between Patchett and Glasser, who create the perfect children’s book.

Ann Patchett is the author of eight novels, four works of nonfiction, and two children's books. She has been the recipient of numerous awards, including the PEN/Faulkner, the Women's Prize in the U.K., and the Book Sense Book of the Year. Her most recent novel, The Dutch House, was a finalist for the Pulitzer Prize. Her work has been translated into more than thirty languages. TIME magazine named her one of the 100 Most Influential People in the World. She lives in Nashville, Tennessee, where she is the owner of Parnassus Books.

Robin Preiss Glasser actually wore tiaras and tutus when she danced with the Pennsylvania Ballet. Now she happily spends her days in jeans, drawing. She has illustrated many acclaimed picture books, including the bestselling Fancy Nancy series. She won the Children’s Choice Award for Best Illustrator of the Year for Fancy Nancy and the Mermaid Ballet. Robin and her family live in Southern California.

“A good story about cooperation—and the democratic process.” — Kirkus Reviews

“[Glasser’s] art amiably captures the daily milieu of farm life, from piglets cheerfully rolling in the muck to farmers chucking hay bales to Nicolette’s daydreaming under dappled leaves and swaying branches.” — Bulletin of the Center for Children’s Books

“[Patchett’s] gentle humor [respects] the whimsy of childhood.” — Bulletin of the Center for Children’s Books

“Award-winning adult author Patchett makes her picture-book
debut with this feel-good story, stuffed with tips on how to solve a problem and execute a plan.” — Booklist

“A fun way to introduce the concepts of campaigning and voting to young readers.” — School Library Journal