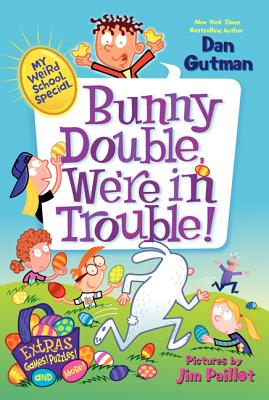 With more than 12 million books sold, the My Weird School series really gets kids reading!

Hip, hop, hooray! Its Easter, and this year Mayor Hubble is hosting an Easter egg roll and a special egg hunt at the mayor’s mansion. And A.J. and the gang are invited! But when Mayor Hubble reveals that the prize golden egg has a thousand dollars inside it, the egg hunt becomes a wacky free-for-all with a photo finish.

Bestselling author Dan Gutman brings his kid-friendly sense of humor to this special series of after-school holiday-themed chapter books featuring hilarious stories and thirty-two pages of games, puzzles, and more. This is one weird Easter special you won’t want to miss!

Jim Paillot lives in Arizona (another weird place) with his weird wife and two weird children. Isn’t that weird? You can visit him on his weird website at www.jimpaillot.com

“Light, appealingly goofy.... The lesson of the day here is fun.” — Publishers Weekly on Miss Daisy Is Crazy!

“A sure-fire hit for the most reluctant reader.” — Kirkus Reviews on Miss Daisy Is Crazy!