The Dark Wind (A Leaphorn and Chee Novel #5) (Mass Market) 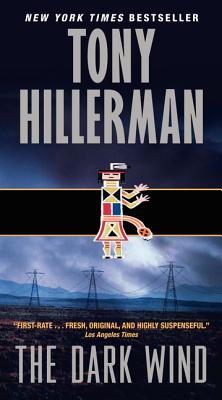 The Dark Wind (A Leaphorn and Chee Novel #5) (Mass Market)

This is book number 5 in the A Leaphorn and Chee Novel series.

The corpse had been “scalped,” its palms and soles removed after death. Sergeant Jim Chee of the Navajo Tribal Police knows immediately he will have his hands full with this case, a certainty that is supported by the disturbing occurrences to follow. A mysterious nighttime plane crash, a vanishing shipment of cocaine, and a bizarre attack on a windmill only intensify Chee’s fears. A dark and very ill wind is blowing through the Southwestern desert, a gale driven by Navajo sorcery and white man’s greed. And it will sweep away everything unless Chee can somehow change the weather.

TONY HILLERMAN served as president of the Mystery Writers of America and received the Edgar and Grand Master Awards. His other honors include the Center for the American Indian’s Ambassador Award, the Spur Award for Best Western Novel, and the Navajo Tribal Council Special Friend of the Dineh Award. A native of Oklahoma, Tony Hillerman lived in Albuquerque, New Mexico, until his death in 2008.

“A book to read with pleasure.”
— Colorado Springs Sun