Warriors Manga: Tigerstar and Sasha #3: Return to the Clans (Paperback) 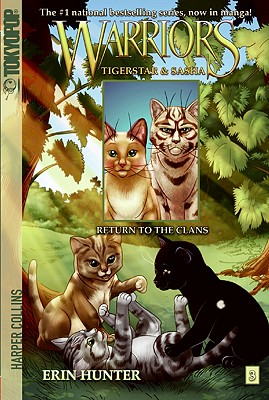 Warriors Manga: Tigerstar and Sasha #3: Return to the Clans (Paperback)

This is book number 3 in the Warriors Manga series.

A manga adventure from the world of Erin Hunter’s #1 nationally bestselling Warriors series!

In the third book of the Tigerstar & Sasha manga arc, a kittypet named Sasha searches for a new home—and wonders if she might find it with ShadowClan and its leader, Tigerstar, during the events of the Warriors: The Prophecies Begin series.

Sasha has returned to the forest to raise her kits, Moth, Hawk, and Tadpole, but Tigerstar still haunts her dreams. She thinks she's a safe distance from ShadowClan's prying eyes, but Sasha fears that Tigerstar will soon discover the existence of his kits. As leaf-bare stretches on and Sasha finds it harder to feed her family, she wonders if her kits might be better off as warriors, with a Clan to protect and train them. But where does Sasha belong?

Erin Hunter is inspired by a love of cats and a fascination with the ferocity of the natural world. In addition to having great respect for nature in all its forms, Erin enjoys creating rich mythical explanations for animal behavior. She is the author of the Warriors, Seekers, Survivors, Bravelands, and Bamboo Kingdom series. Erin lives in the UK.